Notice: Function add_theme_support( 'html5' ) was called incorrectly. You need to pass an array of types. Please see Debugging in WordPress for more information. (This message was added in version 3.6.1.) in /var/www/wp-includes/functions.php on line 5831
 Publix Aprons: What I Made

Life at Publix has been pretty busy lately. Our summer schedule is out and packed with tons of really awesome classes. There were a few recipes from previous classes that I wanted to try, and I was able to get to a few over the past couple of weeks. The Onion Focaccia was one that I could not wait to try out on my own. I was super nervous because it was the first time I was working with yeast by myself – at least at work the other chefs are there and know what they are doing! I glued my eyes to that yeast and I swear I held my breath until I finally started to see it foam, almost 10 minutes later. Chef Rey had said in class that if nothing happens after about 10 minutes, then you know your yeast is dead. So you can only imagine how anxious I was. As soon as the movement started, I breathed a HUGE sigh of relief and continued on with the recipe. I must say, my focaccia came out freakin’ awesome. I added roasted cherry tomatoes on top with the caramelized onions and it was a perfect pairing of sweet flavors. I even got Rey’s nod of approval on the cherry tomato idea and he said I did a good job! Wahoo! I can’t wait to make it again – I have a few other flavor combinations whirling around in my head… I’m thinking something with goat cheese next. Yeah, goat cheese on anything sounds good to me. 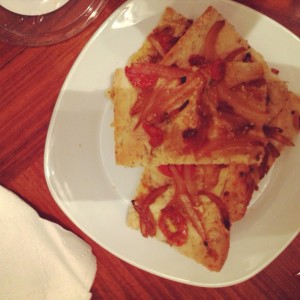 I made the Farro Salad with Roasted Beets and Radicchio, of which I am a huge fan now. It’s so easy to make and barely takes any time at all. The first time I made it I followed Coco Frey’s recipe exactly (it is her recipe from when she came to Aprons for a demonstration.) Beets, radicchio, feta, red wine vinegar, extra virgin olive oil… The second time I made it, I improved a little on the ingredients. I didn’t have any red wine vinegar left, so I tossed the salad in raspberry vinaigrette and then toasted some walnuts and tossed those in as well. This gave the salad a little more of a crunch to it and the vinaigrette made it a bit sweeter than the original. Both versions were delicious and it’s kind of turning into my new go-to dish to make for parties. 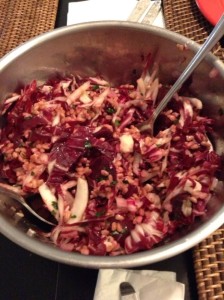 I also made the Spinach Salad with Shallot Vinaigrette. I made it as the starter for a dinner with fish, so I left out the poached chicken from the original recipe. This salad has kiwi, mango, papaya, toasted nuts, and creamy melted goat cheese. The salad was great, but I messed up something with the dressing. It tasted good, but it didn’t have the same consistency as it does whenever we make it in class. I asked Rey about it and we figured out that for some reason, the recipe I printed for myself was missing an ingredient – that ingredient just happened to be the same one that would have thickened it properly. Oops. At least now I know for next time.

I made another dish from work that is an excellent side dish to pretty much any protein – collard greens with mushrooms and potatoes. You sauté the collards and mushrooms in roasted garlic oil and crisp up the potatoes, and it all just blends together perfectly. I used a package of wild mushrooms and red potatoes. You can use kale instead of collard greens, too. I had never tried collards until we made this recipe at work and I really like them. There are so many varieties of greens that sometimes it’s hard to keep track. But you know me, I am always up for trying new vegetables and healthy dishes. This is definitely one I will continue to make time and time again. 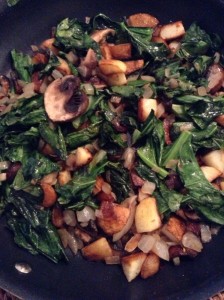 This last recipe I have made twice now and each time I was blown away by how awesome it is. It’s Rey special recipe that is so near and dear to his heart, I could never completely give it away on thisblog. I guess you’ll just have to come to a Publix Aprons class, or wait until you’re lucky enough for an invite to dinner when I’m making it. J Salmon with chili garlic sauce… Be warned that you will sweat while eating this sauce because it is definitely on the spicy side. But it’s well worth every drop. Everything you love is in this sauce and then some. It’s top notch, I promise. I wouldn’t lie to you. 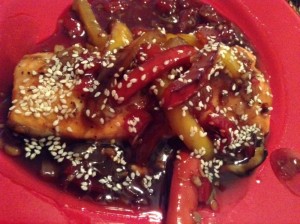