Notice: Function add_theme_support( 'html5' ) was called incorrectly. You need to pass an array of types. Please see Debugging in WordPress for more information. (This message was added in version 3.6.1.) in /var/www/wp-includes/functions.php on line 5831
 Kale, Peanut Butter and Banana Smoothie

I’ve been on a kale kick lately. I’m not sure if it’s because I really like it or because the only bag available to purchase is huge and my only choice is use it every single time I cook.

I’m going to go with a little bit of both.

Seriously though. I can buy spinach in small bags, but nope, not kale. It’s like you’re forced to use it over and over again until you get sick of it. Except that you don’t because it’s really good, and so good for you, and pretty versatile, too. You can season it with salt and pepper and make the ever-popular healthy baked snack, kale chips. You can sautée it like you would other leafy greens like spinach or collards and mix it with other veggies for a nutritious side dish. Or you can throw it in the blender with a bunch of other stuff and make a green smoothie.

I made a green smoothie. And I am in love. I used my Better’n Peanut Butter and a banana, a dash (or four) of cinnamon, a handful of kale, a little bit of unsweetened almond milk and made one of the tastiest smoothies I’ve ever made. It was the perfect breakfast after the workout I had done that morning: an hour of pretty intense spin and then an hour of a strength training class called Body Sculpt. This is my favorite combination – intense cardio intervals on the bike followed by some weight lifting targeting the whole body and ending with a little ab work. By the time I finish and get home, I’m pretty hungry and always crave a refreshing smoothie filled with good-for-you ingredients to remedy the exhaustion and muscle burn I’m feeling. It’s a good feeling, don’t get me wrong. I love it when I’m sore; it just means I had a great work out. And it also means I can treat myself with a yummy peanut-buttery smoothie. 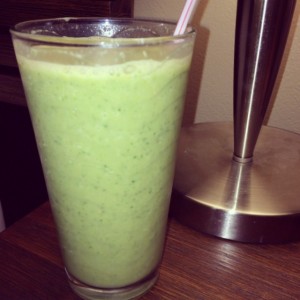