Two beer dinners in one week! Who am I??? The whole craft beer thing is kicking my wine-loving self into some brand new territory, but I have to admit — I don’t hate it. As I mentioned before, there are definitely a few that I just cannot handle and that’s fine, but I’ve been discovering a few that I really enjoy. It’s pretty cool to see how the different varieties of beer pair with food too. The same way a wine can highlight flavors, beer can be just as clever. 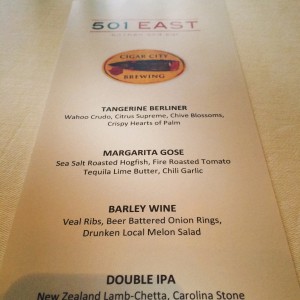 So two beer dinners in one week makes me laugh, and so does this. I was invited to this beer-pairing dinner with Cigar City Brewery at the Boca Resort via Twitter, the morning of the event. See what social media can do?! Megan, the Digital Online Community Manager of the Boca Raton Resort, tweeted me as I was huffing and puffing away on the elliptical at the gym. She apologized for it being such late notice but hoped I could make it. You know what I did at that point? I raised that resistance on the elliptical up a few more notches. Yep, if I was going to a beer dinner there was going to be a little extra effort going on at the gym that morning.  I’ve never been to the Boca Resort so I was super pumped to go. Naturally, I invited Denise to come as my guest (we’re always each other’s first pick for things like this). She’s also a wine gal whose slowly learning to like craft beer too.

The dinner was held in the 501 East restaurant in a private room where the Executive Chef, Ray, and Cigar City rep, Phil, took turns talking to us in detail about the beer poured and food served. Cigar City is a Tampa-based brewery that is only five years old. In such a short time, they’ve become one of the most popular breweries in Florida and definitely have a strong presence in the craft beer world.  When we arrived, we were instantly poured a glass of one of Cigar City’s most popular beers, Florida Cracker. I’ve had this at other bars before and do like it. It’s light and was a nice way to “welcome” the guests.

First course was a wahoo crudo with citrus, chive blossoms and crispy hearts of palm. The dish was bright, acidic, and had great texture. The hearts of palm added a great amount of crunch to the buttery-soft wahoo and the pulpy wedges or orange and grapefruit lining the dish. Two thumbs up on this one from me. I’ve never had hearts of palm prepared this way and I think it needs to happen more often… The beer paired with this dish was the Tangerine Berliner. Phil told us that 1,000 tangerines were juiced and zested to make this beer. I lifted the glass to take a sip and before I could even open my mouth, I got a whiff of tangerine. Omgggg. It smelled SO good. I almost didn’t want to drink it because I just wanted to keep taking in that sweet and sour aroma. But it’s a good thing I did taste it because it quickly shot to the top of my list of favorite craft beers. What a great complement to the dish we were served — citrus on citrus. Delish! 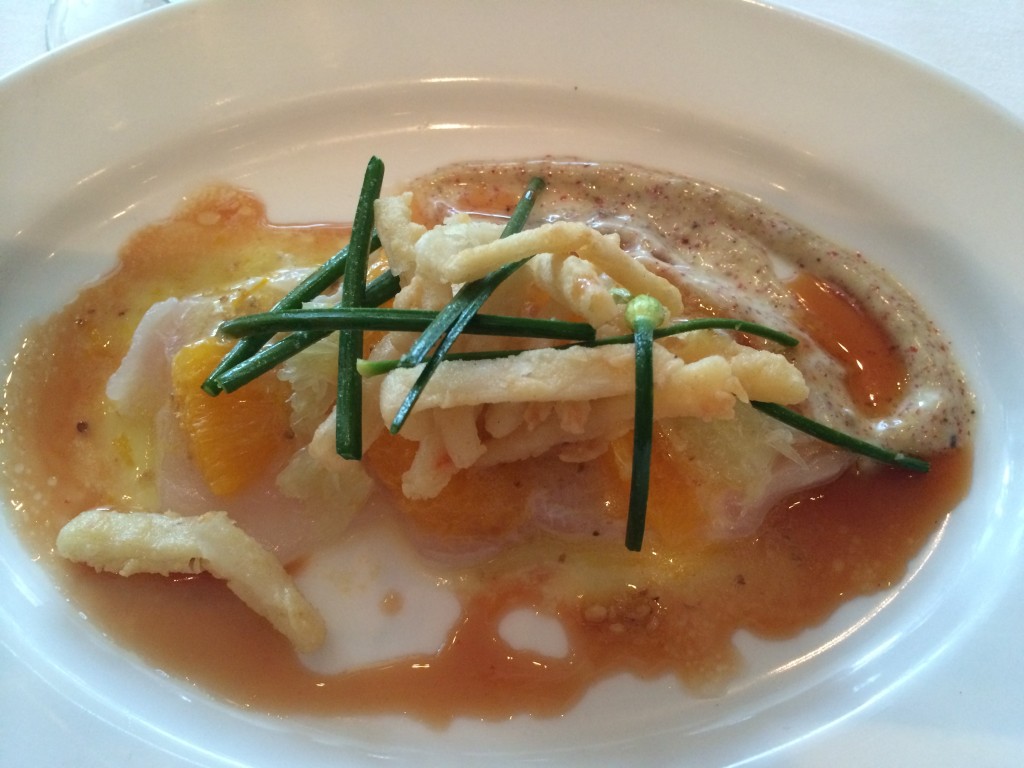 For the second course, we were served sea-salted roasted hogfish cooked in a banana leaf with fire-roasted tomato, tequila lime butter and chili garlic sauce. Hogfish was another first for me. I’d compare its texture and taste to something like cod or sea bass. The flavors in the sauce were an insanely delicious mixture of sweet, spicy, and savory and really lit up the dish. To amp up the tequila lime butter even more, we were served a Margarita Gose. No, not a margarita cocktail — this is still a beer dinner. This beer, in the same vein as the Tangerine Berliner, used the juice and zest of 1,000 limes. It was pretty freaking close to tasting like a real margarita, and if you know me, then you know I LOVED this beer. 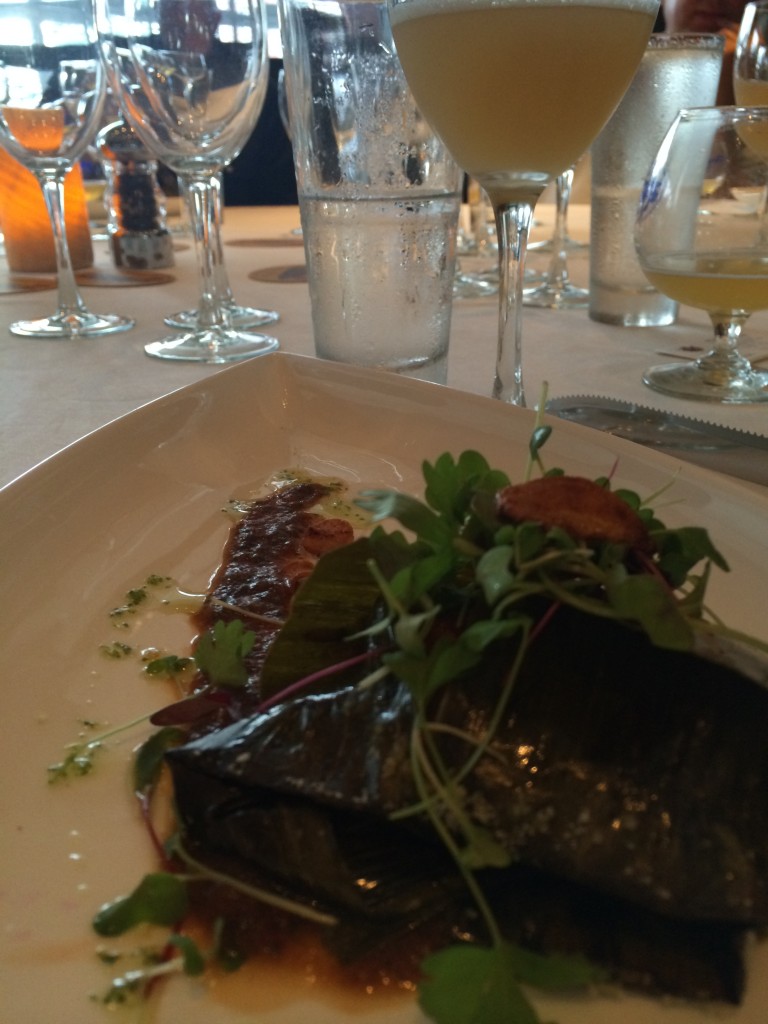 Now we get to the courses that require substitutions for me, haha. The third course was veal ribs with beer battered onion rings and drunken local melon salad. My plate came with extra onion rings instead of the ribs. At first I was kind of like, uh…chef, you couldn’t come up with anything better? But then I tasted one of the onion rings and changed my mind. I wanted ALL. THE. RINGS. Yummmmm. Crispy, crunchy, savory…I’ve never liked onion rings in the past, but I guess I’ve never had them beer-battered. This is totally the way to make them! Although I devoured the onion rings and melon salad, another yummy component of the dish, I didn’t care for the beer paired with this course — Barley Wine. I thought I’d like it for the sheer fact that wine is in the title. But nope. Ew. This was just not for my taste in any way, shape, or form. I pushed it to the back of my other glasses and instead, asked for a refill of the Margarita. 🙂 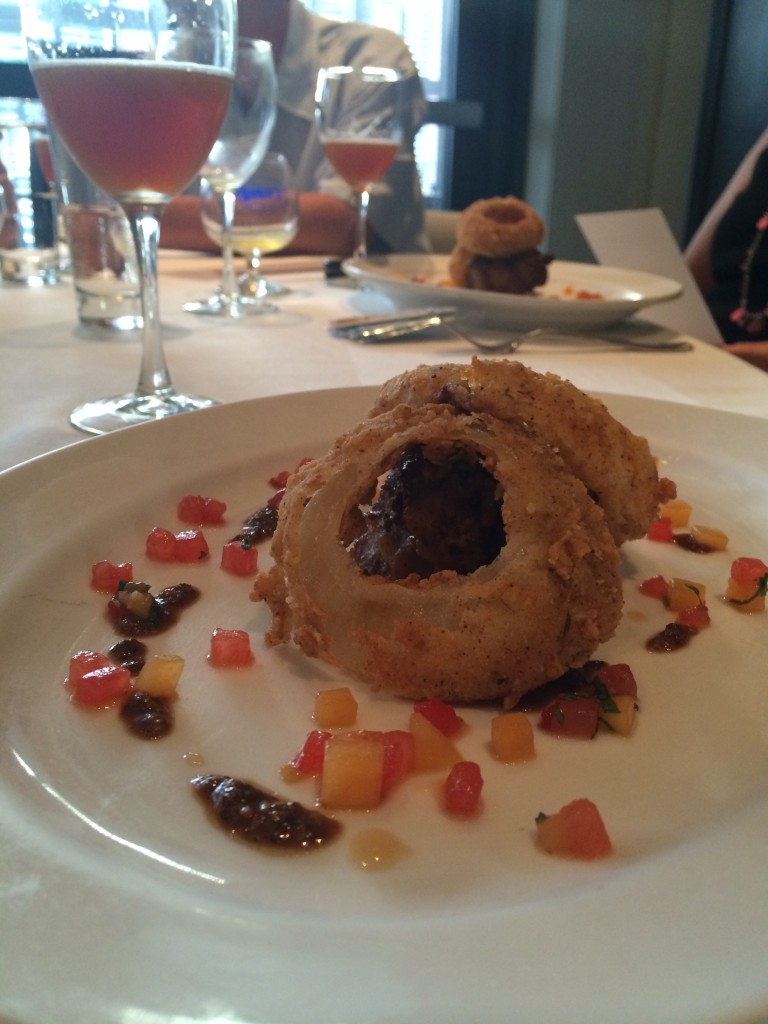 Course number five was a New Zealand lamb-chetta with Carolina stone ground grits and Florida lychee. Did I eat this? No. The chef made me a totally different plate. It was a beautiful salad of mesculin greens and heirloom tomatoes, topped with burrata. I was super content with my ooey, gooey, creamy burrata and refreshing plate of vegetables. I did want to try the grits, but they were made with duck fat. Oh well. Time to try the next beer…a double IPA. Another one that isn’t so much my thing. That’s okay, I still had some of the Margarita Gose left in my glass. 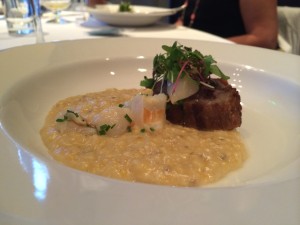 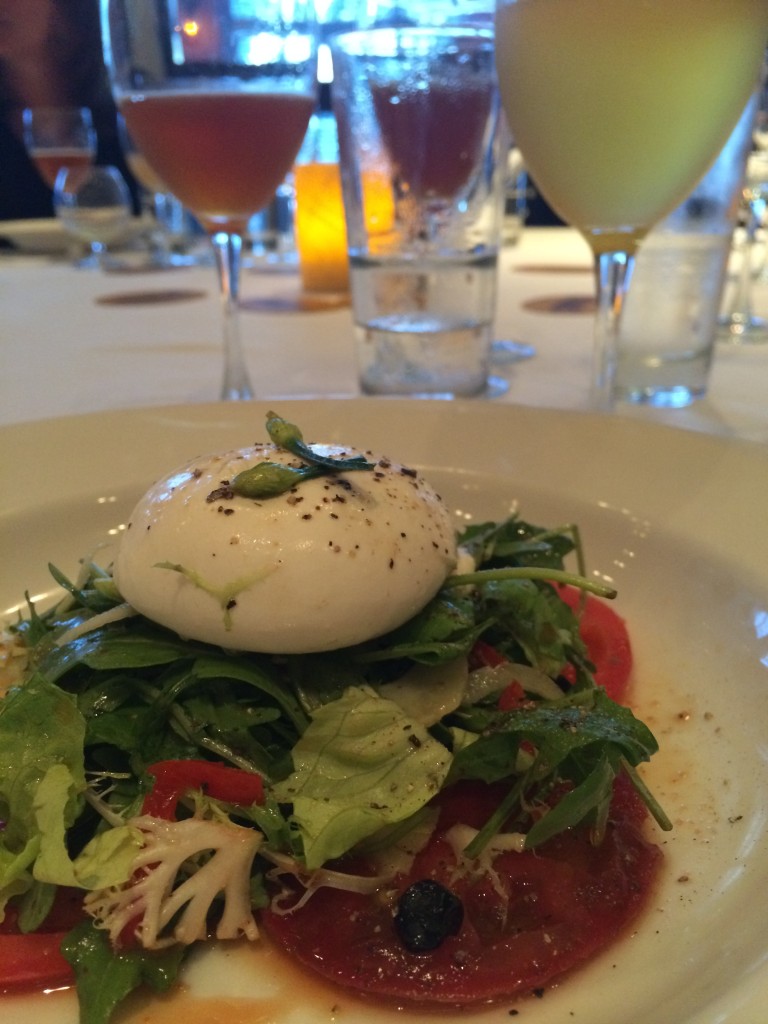 Dessert was a winner. Smoked vanilla soufflé with espresso ganache and macerated local cherries. The ganache was in a small dish off to the side and we were instructed to pour it directly over top of the soufflé before indulging — and indulge we did! I could have drunk that ganache right from the dish, it was SO delicious, and even better when paired with the soufflé, which even for a simple vanilla soufflé, was full of rich, deep flavor and was velvety smooth in your mouth. Very appropriately, we were served Cubana Espresso, a beer laced with coffee. YUM!! Coffee beer and espresso dessert. You’d think I would have been up all night, but I actually slept like a baby. Good food and drinks will do that to ya. 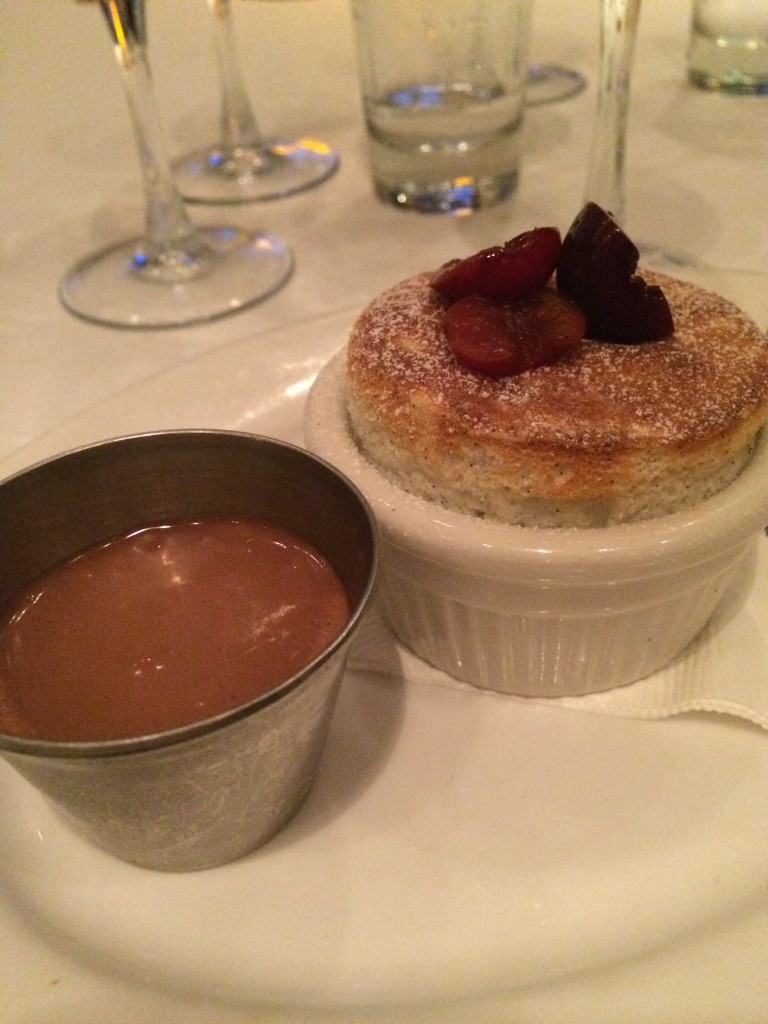 Now Denise and I are hoping to plan a road trip to Tampa so we can visit the Cigar City Brewery, and I’m itching for the next time the Boca Resort invites me to an event. #Lifeofafoodblogger. Doesn’t get much better, does it?

Disclaimer: You must be a member of the Boca Resort or staying in the hotel to dine in any of their restaurants or attend any events such as this beer pairing dinner. I was invited on behalf of the resort as their guest.