New restaurants come in and out of Boca in the blink of an eye. Whenever a new place comes to town, I try to get there as quickly as possible because who knows how long it’ll stick. My roommates are the same way. Amy and Foodie — and even Emma — thrive on the restaurant scene as much as I do. We have running lists in our heads of places we need to go. It’s a never-ending list. One can only hope we eventually make it to every single spot.

We did cross one off the list recently and had dinner at Fork and Knife, a cute restaurant with a diner-esque atmosphere and a focus on “modern comfort food.” The walls are adorned with posters of old diners from all over the country and the decor is comfortable and inviting. The bar scene was busy on a Friday night so it seems like the place is doing well. Their Happy Hour is from 3-8 Monday through Saturday — that alone will attract a crowd. Very few restaurants have a Happy Hour on Saturdays, or one that lasts that long!

Amy’s best friend was visiting from NY so the five of us went to check it out for dinner. Our waitress told us the appetizer specials and we all decided to share an order of the mussels. I apparently missed the part about bacon. When I took a bite, all I could taste was that salty, briny, bacony taste. Ew. There were bits of bacon in the dish, but it was mainly the broth that had been infused with bacon. No thanks. 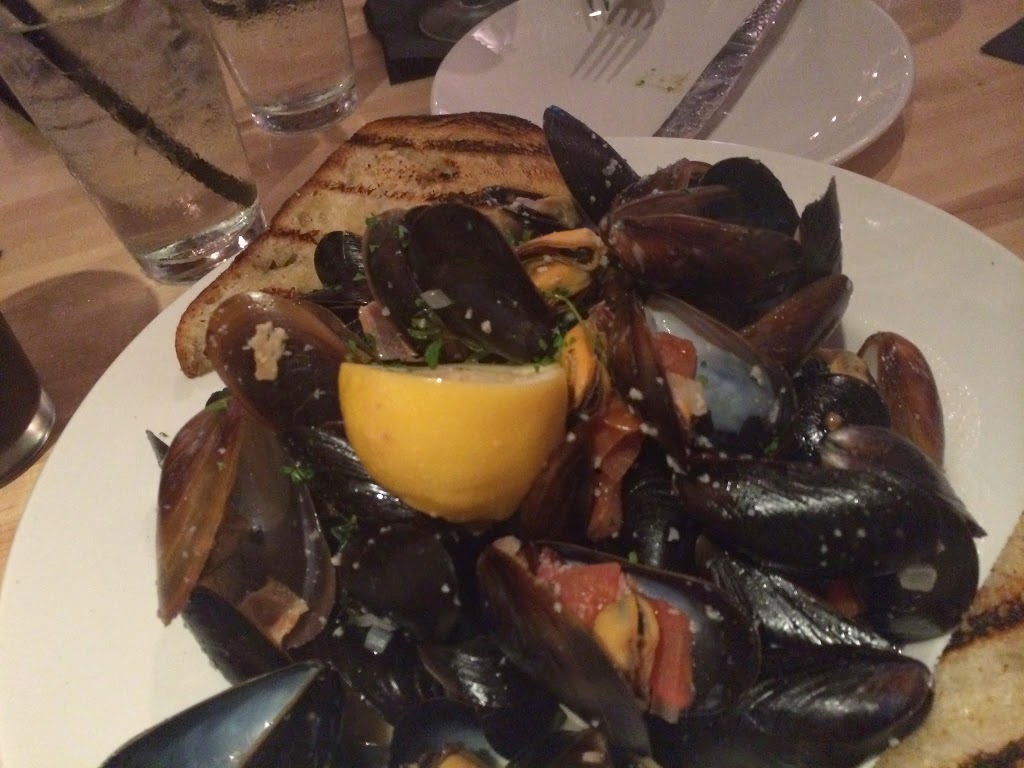 Good thing we got another appetizer, the Portobello Caprese with fried green tomato, pesto and a balsamic glaze. Now that I ate. Fried green tomato is a new favorite of mine, and it paired nicely with the earthy portobello mushroom and mozzarella. Pesto isn’t a staple of caprese, but after trying this, I’m convinced it needs to be! 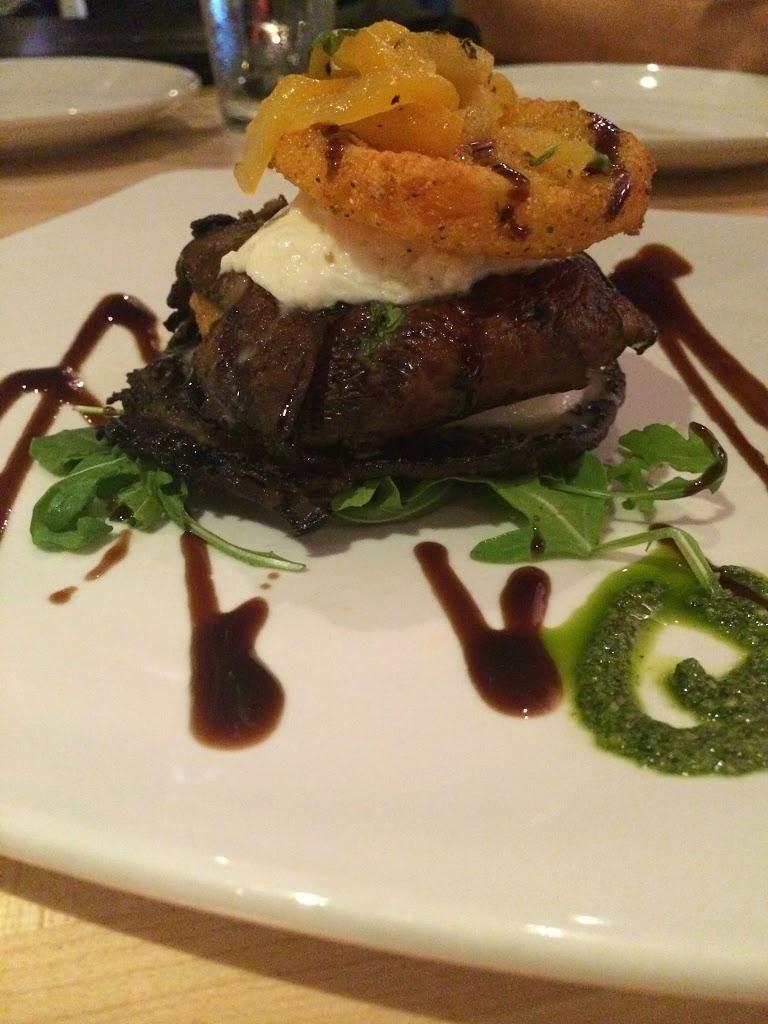 Dinners were scattered. Burgers, salads, seafood, and meat — we covered it all. Foodie got the Shrimp and Grits with Andouille sausage He liked it but felt the grits overwhelmed the dish. Those grits were delicious though; of course we all had to taste. Amy and Emma shared the Brisket Pot Roast with red potatoes and carrots. I haven’t had brisket in ages, but it looked good and they both enjoyed it. Dana went all out and went for the F and K Signature Burger. This burger has it all — cheddar cheese, crispy onions, a fried egg, bacon jam, and the F and K “Burger Sauce” with salt and vinegar fries, which I kinda, sorta inhaled a decent amount of. Oops. But it’s okay, because I got a salad! The “Famous F and K Greek Salad” with cucumbers, chickpeas, feta, pepperoncinis, beets and tomatoes and homemade Greek dressing. I added grilled shrimp too. The addition of beets to a Greek salad was interesting; that’s what enticed me to get it. I was pleasantly surprised at how well everything went together. But then again, how can you go wrong? Chickpeas, Feta, Beets…three of my favorite ingredients! 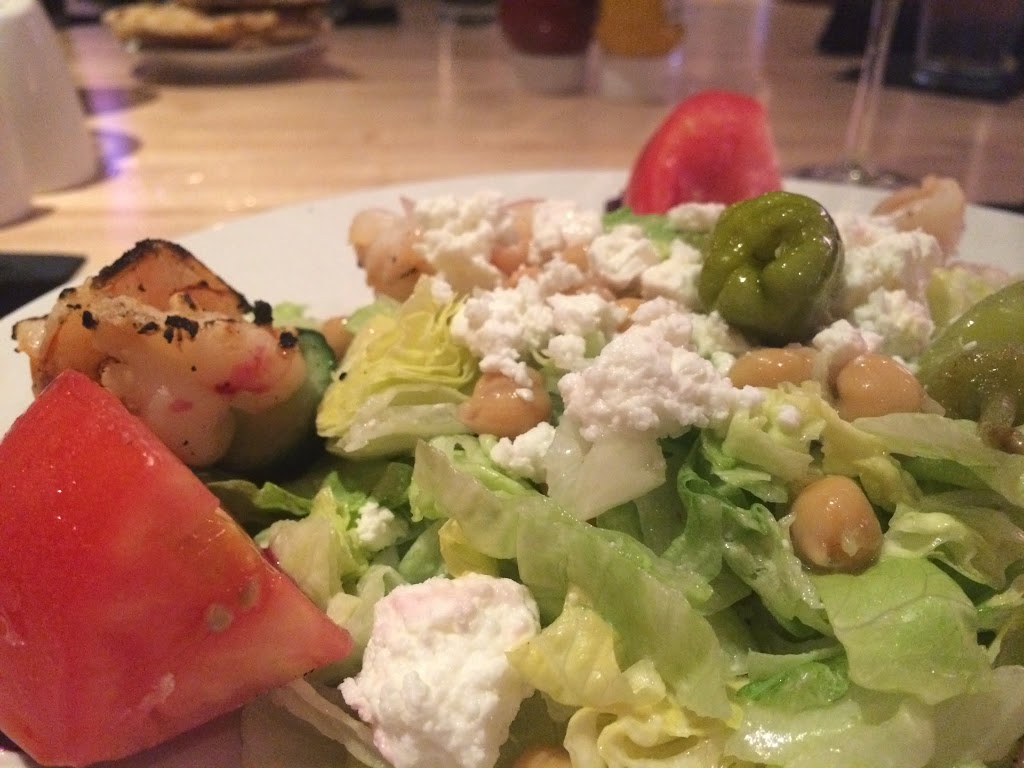 I thought Fork and Knife was a cool place and I would go back. Our waitress was a newbie, only on her third day, but you could tell she had been working in the industry a while. She was on top of her stuff and we had fun with her. Though Fork and Knife isn’t over-the-top amazing like some of the local places I’ve been, it was still a nice night out with friends. That’s what we’re there for anyway right? It’s all about enjoying good food with good people!