Channel your inner college-kid and combine two of the most iconic dorm room favorites — macaroni and cheese and ramen! 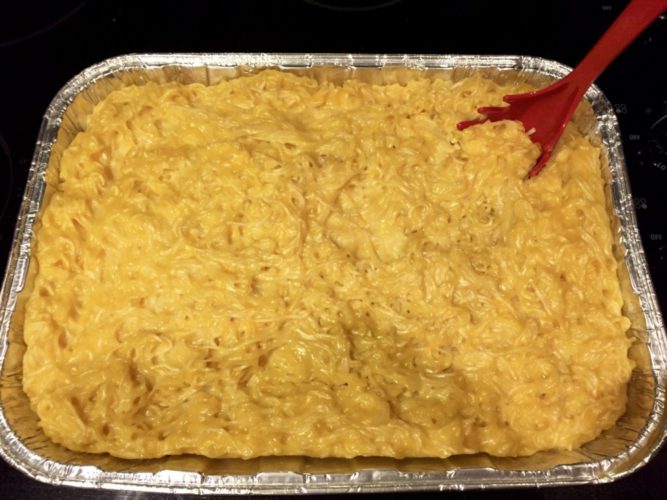 Excuse me while I take a mini break from the more sophisticated recipes you usually find here on Take A Bite Out of Boca… I’m going back to the college years, when microwavable meals were your best friend and the idea of turning on a stove was even scarier than the idea of what happens after college. I ate pretty healthfully when I visited the dining hall at Rutgers University — I was a regular at the salad bar and always packed my plate with veggies. However, I had not yet caught the cooking bug and was a fan of LeanCuisine and other easy-to-throw-together meals whenever I was eating in my apartment. Instant macaroni and cheese was always a favorite, and of course, ramen — a staple in every college student’s survival kit. So when my EPIC (that’s Eating Partner in Crime, for those who couldn’t figure it out), Jill, decided to throw a college-themed birthday party, I knew just what to make. 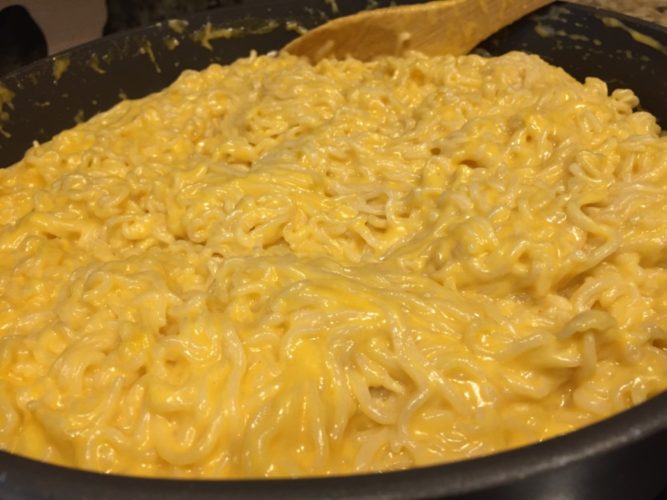 I knew it would be good — I mean, how can you go wrong with noodles and cheese? But I had no idea just how good. It’s not just a college kids’ dream meal (or late-night drunken snack), but it also satisfied all of our millennial mouths just as well. Jill’s party was a huge success — partly because of the college-inspired spread of food we put out. The Ramen Mac ‘n Cheese served as the entree, alongside a cereal bar complete with Lucky Charms, Reese’s Puffs, Chex, Cheerios and an array of candy toppings, bowls of flavored popcorn and an over-the-top birthday dessert. Picture a layer of soft and chewy chocolate chip cookie, another layer of ooey gooey brownie, and a third layer of strawberry POP-TARTS. Yep, Jill is brilliant and that’s why she is my best friend. Along with ramen, pop-tarts are another college-kid staple, and there was no way this party would be without them. There was also a keg. And keg stands. And flip cup. And card games. (And then there I was drinking my bubbly out of a red solo cup. Are you surprised?) I’m now convinced that people should have college parties after college, when you actually know how to throw a party.

But back to the Ramen Mac ‘n Cheese. You don’t need to throw a college party to make this. It’s just a fun way to serve classic mac and cheese, and for those of you with kids, I have a feeling they’ll love it. It’s easy to make, apart from the cheese grating. That takes time and effort. I basically got a second arm workout in for the day, grating four 8 oz. blocks of cheddar cheese. Pre-grated cheese won’t melt as well, so I highly recommend you do the grating yourself. I know it’s a pain, but it’s worth it.

You’re not using the ramen flavor packets, so stop getting all huffy and puffy about this Ramen Mac ‘n Cheese being loaded with sodium. Because it’s not. All we’re using is cheddar cheese, milk and noodles. We’re not even adding any salt and pepper. It doesn’t need it. The extra sharp cheddar cheese gives enough flavor to keep you going back for forkful after forkful. And to give it even more unique flavor, I’m not just using any kind of milk. I’m using unsweetened vanilla cashew milk. The vanilla adds a touch of sweetness and I personally think it really enhances the flavor profile. This is macaroni and cheese, totally and completely elevated. Just make it and you’ll understand. 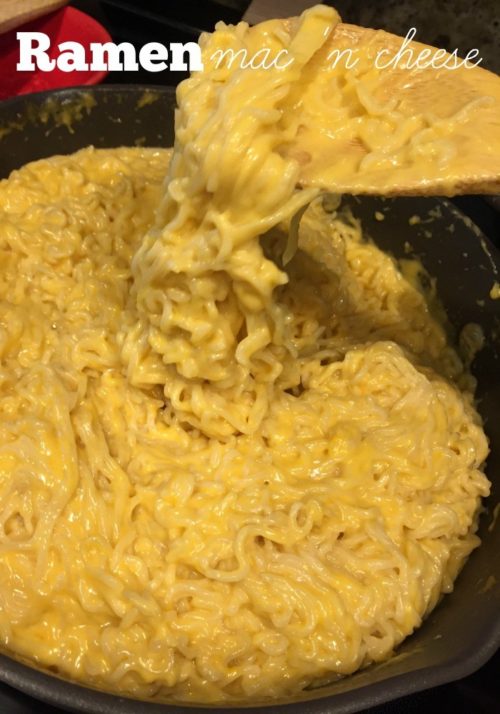