There is so much to do in Florida. Though I’ve lived here almost a year, there’s still so much I haven’t done. However, I finally got to cross off one of the things at the top of my list: a trip to Key West! My family came to visit a couple of weeks ago and decided that, instead of spending their whole vacation here in Boca, we’d take a little excursion down south and explore Key West for a couple of days. I was all for it since I had never been there. As a South Florida local, that’s kind of sacrilegious. We headed out in the morning and arrived around 3 in the afternoon. Our room at the hotel wasn’t ready yet, so we went straight to the beach to see my mom’s friend Skipper. He’s a jazz musician and was playing at a cute little restaurant at Higg’s Beach called Salute! We hung there for a little and had a drink, shared appetizers, and enjoyed the fresh air and music. The seafood appetizers were yummy and a nice way to start out our vacation — steamed mussels, sautéed sea scallops and chilled Key West pink shrimp. Very appropriate. We weren’t even there an hour and we were already feeling that mellow Key West mood. It’s a strange place, kind of like Spring Break for old people? Well…at least that’s how it felt at this restaurant. 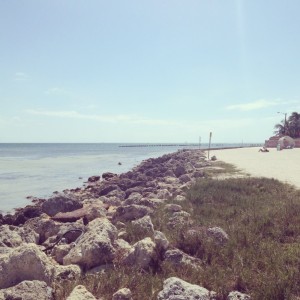 For dinner that night, Skipper let us in on the local food scene. The Bangalore Vegan Food Club is a buffet-style Indian/Asian dinner held in the home of a former restaurant owner. Phillip Simmons hosts a very exclusive daily dinner in his home. Members of the club can reserve their spot on Facebook or e-mail and pay a small fee to cover the cost of food. Phillip prepares everything right there in his kitchen, by himself, and displays it all for his guests. There was a ton of food; of course I had to try a little bit of everything. It was all vegan so I didn’t have to worry about running into any meat, which was nice. Homemade mango chutney, vietnamese spring rolls, vegatable koftas (crispy garbanzo flour battered veggie balls), steamed beets, jicama salad, spinach and lentils, jasmine rice, tons of curried vegetables… Everything was delicious. I was most proud of my sister and dad for actually trying such different food — they’re not usually too adventurous. After we were good and stuffed, we went to a jazz club on Duval Street where Skipper would be playing throughout the night. Mom and I also did some exploring on Duval, checking out the cute little bed & breakfast next door to the club. We were hoping maybe we could change it up and stay there for our second night but they were booked solid. We still checked out the rooms and I made a mental note to check back for rates once the season is over. I would love to go back for a weekend getaway and stay at a bed and breakfast. That’s definitely the way to do it there. 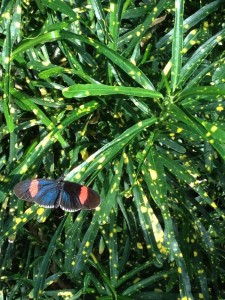 The next day was jam packed with Key West-y things. I’d asked some of my Florida friends for recommendations of things to do and see while there — one of which was to visit the Key West Butterfly and Nature Conservatory. Very cool place. Butterflies fly freely all around us in an enclosed environment. One of the coolest things we saw was the case full of moths in various stages of development. Did you know that some live for only  4 days?! They literally break out of their cocoons, eat, mate and then die. That’s it. And butterflies aren’t much different, just a tiny bit longer life span. When you think about it, that’s essentially all we do as humans, too. Just for much, much longer. Kind of makes you think about the meaning of life, doesn’t it?
By the time we got out of there, we’d worked up an appetite. It was brunch time, so we headed over to Banana Cafe (recommended to us by the woman at the Conservatory, as well as the hotel concierge). What a great menu — the restaurant even has their own cookbook! I was so tempted to buy it, but I can just look at the recipes on their website. They’re most known for their variety of crepes, both savory and sweet. Rebecca went super savory with a bacon, egg and cheese crepe; Mom did it big with the ratatouille crepe with eggplant, zucchini, peppers, onions and tomatoes; Dad got eggs and bacon with home fries, and I got the quiche special, mushrooms, spinach and tomato, with a side of fresh fruit. This was probably my favorite meal of the trip. I love a good veggie-filled quiche and this was pretty top notch. 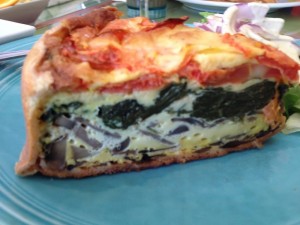 Finally it was time to lie on the beach and do nothing but soak up the Key West sun. Now, if you know me and my family, we are like the anti-sun block crew, especially me and my dad. We barely wear anything, and if we do, it’s SPF 4 or 8 — not block. Yeah, give me all the skin care lectures you want, it’s just the Wizov way. We like to be tan, okay?! So I fell asleep lying on my back…and an hour and a half later I woke up. Bright red, and in pain. I’d never burnt that badly in my life. Spare me the “I told you so” because yes, I know it’s my own fault. Everything hurt…and continued days after returning home, too. All I have to say is TGFA: THANK GOD FOR ALOE!
Later that night we headed to Mallory Square for the Sunset Celebration. This is a must-do/see for anyone visiting Key West. The sunset is a huge deal to everyone there; tons of people gather together to watch the gorgeous sun set over the water. It’s one big party with street performers and vendors, food and drinks, and random activities and games for everyone to really enjoy themselves. I captured an absolutely beautiful picture — the view was breathtaking. I want to get this picture blown up and hang it on my wall. Isn’t it gorgeous?! 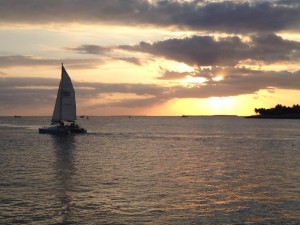 Dinner was at Red Fish Blue Fish, a local seafood joint that’s right in the middle of everything. This location makes it an ideal place to have dinner before or after you watch the sunset. The one thing I wanted to make sure I tried while in Key West was the conch, so when I saw conch chowder on the menu I immediately ordered it. It had clams, tomatoes, potatoes, carrots, celery, lots of yummy spices and of course, was filled with conch. I also got the shrimp basil salad with mixed greens, tomato, cucumbers, hearts of palm tossed in a balsamic vinaigrette and basil-infused oil. Bec had her share of seafood with the fried combo feast — shrimp, scallops and mahi-mahi all fried to crispy perfection. Mom paid homage to our whereabouts and ordered the Mallory Square grouper with blue crabmeat stuffing and hollandaise sauce. Guess what my dad ordered? A Philly cheesesteak. Yep. You heard right. A seafood restaurant in Key West, FL with tons of great seafood dishes on the menu and that’s what he gets. My dad could be at the most prestigious restaurant ever and if there’s a Philly cheesesteak on the menu, that’s what he’ll order. He really liked it, too. But truthfully, I don’t think there’s a cheesesteak he doesn’t like.
After dinner, we went to see “The Drowsy Chaperone” at a little local theatre in Mallory Square. We are definitely “show people.” We’ve all done our fair share of staged shows, singing and dancing our hearts out, and have seen many on and off Broadway musicals. It was such a good show — hilarious, great acting, fun music, and the perfect ending to our amazing day.
On our last morning, we took a tour of the Hemingway House. It was pretty cool — he was quite an interesting person. There were SO many cats. They were everywhere. I think the tour guide said at one point there were 75 cats living in that house. Whew. I can’t even imagine what my allergies would do to me if I were around that many cats at one time. I may have been able to resist the cookbook at Banana Cafe, but the Hemingway bookstore had “The Florida Keys Cookbook” — after flipping through the pages and seeing some of the recipes, I had to have it. There are so many great seafood recipes that I’m dying to try out.
We ate breakfast at the Six-Toed Cafe next door (named for the Hemingway cats) before leaving the island. Our Key West trip was really nice. It was the perfect little (and much needed) vacation for all of us. I think we all would have liked to spend a few more days there though, preferably at a bed and breakfast. Mom’s brain is already spinning with ideas for our next family vacation. She’s thinking cruise… I’m thinking “Hell Yes!”
Here are a few photos from the trip: