One of the countries I am dying to travel to one day is Greece — and while it may not be in the cards anytime soon, at least I know I can get an authentic taste of the country right here in Boca at the newly opened Ouzo Bay. The restaurant recently took over the space in Mizner Park that used to be home to Jazziz. If you’re familiar with the location, you know how huge it is, which makes Ouzo Bay the perfect location for parties and events, especially with its inviting atmosphere, chic and modern decor, and indoor and outdoor seating. 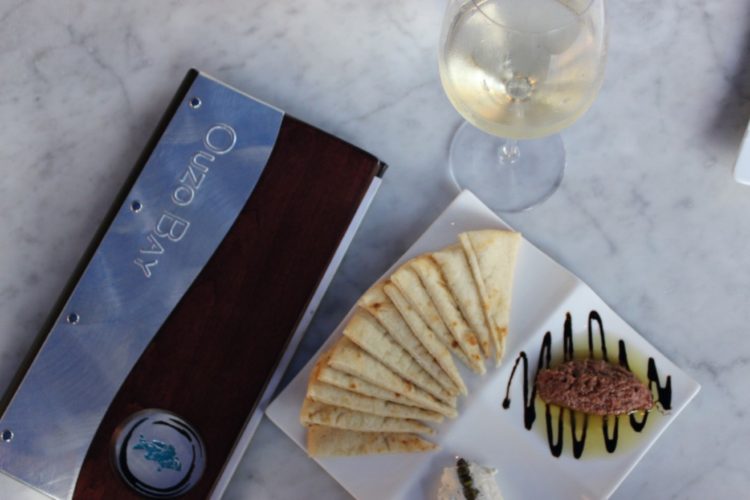 Ever since tasting their grilled octopus during this past year’s Boca Bacchanal Grand Tasting, I could not wait to return to the restaurant. That one bite had everything I could ask for — a crispy char, a great balance of sweet and salty, and it looks beautiful too. Of course this was one of the first things I ordered upon sitting down at Ouzo Bay. And thankfully, the dish was just as incredible as I remembered the bite-size tasting was at the event. Char-grilled octopus is tossed with sweet red peppers and onions, and a red wine caper vinaigrette. They offer a half and full-size portion. Since we knew there was much more food on the way, the half portion was the perfect amount. 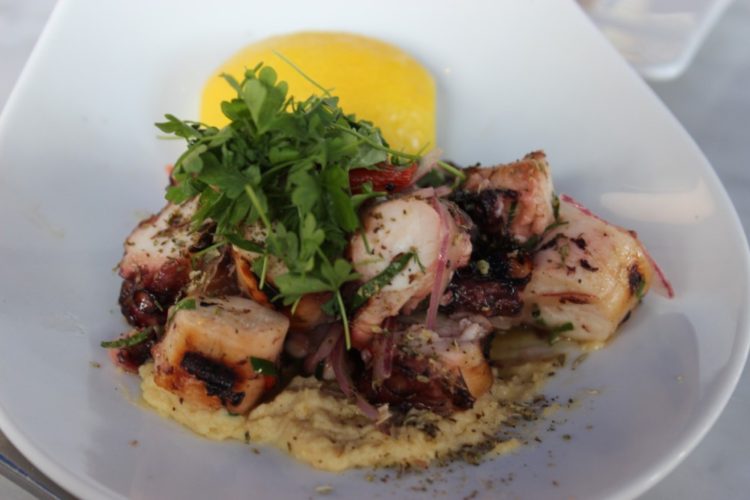 It’s no surprise that the octopus jumped off the menu at me, but even before I saw it, my eyes were drawn to the “Feta Sto Fourno,” or Baked Feta. Um, YES PLEASE! A thick block of baked feta cheese sits on top of juicy beefsteak tomatoes and a velvety-smooth eggplant puree, drizzled with balsamic reduction to add just the right amount of sweetness and garnished with micro greens. One bite of this and I was hooked. I’ve never seen anything like this before on any Greek menu and can’t understand why. It’s incredible. Baking the salty feta brings out such a deep flavor that almost reminded me of ricotta in lasagna. The tomato added a pop of freshness and the silky puree was earthy and robust. The best part about this dish? It’s offered on the happy hour menu for only $5, Sunday through Friday from 3-7pm! 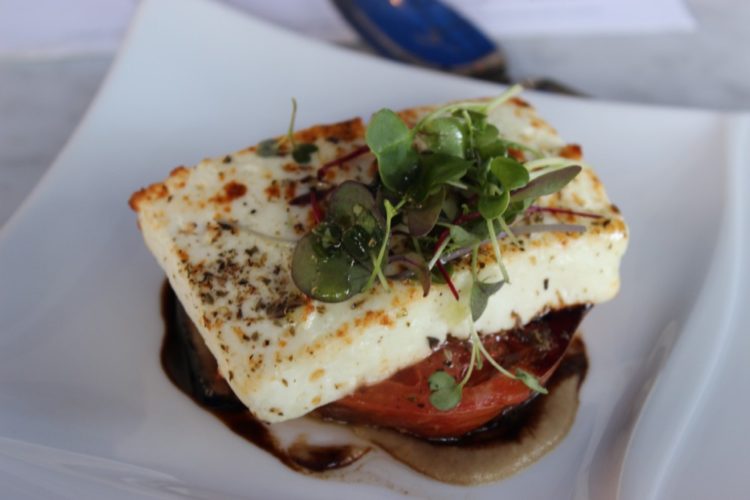 Moving on to more deliciousness… You can’t really visit a Greek restaurant and not have the Spanakopita. This traditional dish of spinach and feta baked in flakey phyllo dough is a staple, and it’s really hard to mess it up. Ouzo Bay does an excellent job with theirs, adding leeks and a variety of aromatics to the mixture. The ratio of filling to phyllo is perfect — I guess that’s where people can mess it up — too much phyllo and not enough filling would be a total failure. This is also offered during happy hour, for $7, and would be perfect with a crisp glass of Greek white wine. 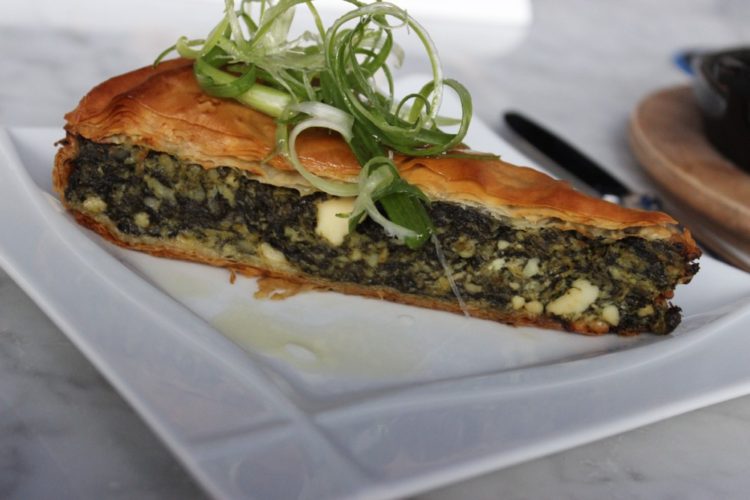 Speaking of which, the in-house Sommelier and Beverage Manager, Bradford, brought out some delicious wines from around the world for us to try with each course. We started with a Greek white wine, Nico Lazaridi “Magic Mountain” Sauvignon Blanc, moving on to the Whispering Angel Rosé from Côtes de Provence, France, and finished with the Bodega Naides Verdejo from Spain. 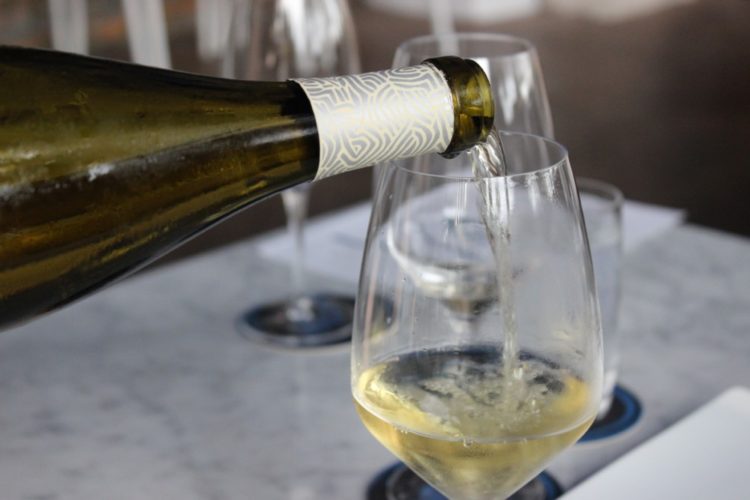 The feast continues… The next dish served by our incredible server, Charlie, was the Shrimp Saganaki, which features sauteed Paradise Blue prawns with a confit of fennel and baby tomatoes, Kalamata olives (which I 100% avoided), zucchini, feta and a spiced ouzo-tomato sauce. At first glance, I didn’t think I’d like it. Olives and ouzo — not my favorites. Surprisingly, the olives weren’t overpowering and the ouzo was very nicely balanced by the spices and tomato. So despite not being a fan of two of the main ingredients, I was still able to thoroughly enjoy the dish. Keep that in mind, all you olive and ouzo-haters! The prawns were cooked beautifully and all of the ingredients really played well with each other. 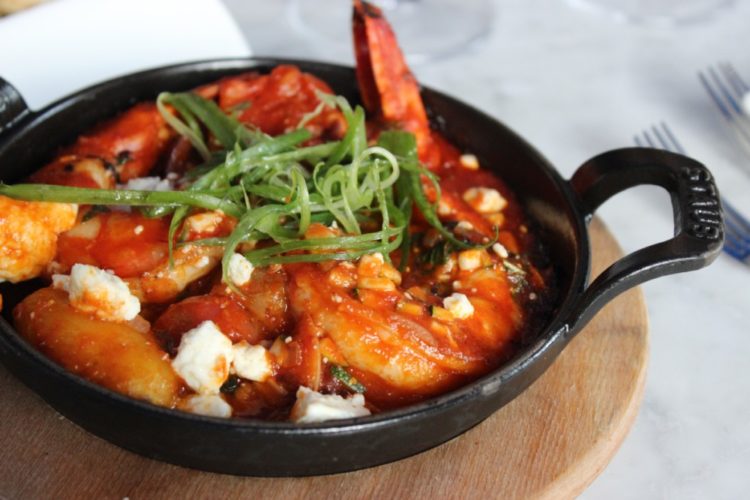 Ouzo Bay offers a wide variety of fresh-caught whole fish, grilled on charcoal and priced per pound. The chefs will debone the fish for you, unless you tell them otherwise. If you plan on ordering the whole fish, they recommended allowing 30-40 minutes for preparation. We were lucky enough to get a taste of the Lavraki, otherwise known as Bronzino or Mediterrean Sea Bass. It’s a lean white meat fish that’s super tender and mildly sweet. For presentation purposes, our fish was not deboned. In hindsight, I wish that I had asked them to debone it after taking my photos so I could have eaten more of it. After coming across too many bones, I sort of gave up. It was, however, AMAZING, and I would 100% recommend it to anyone who loves a good, fresh fish. And even those who don’t — because after you try this, you will. 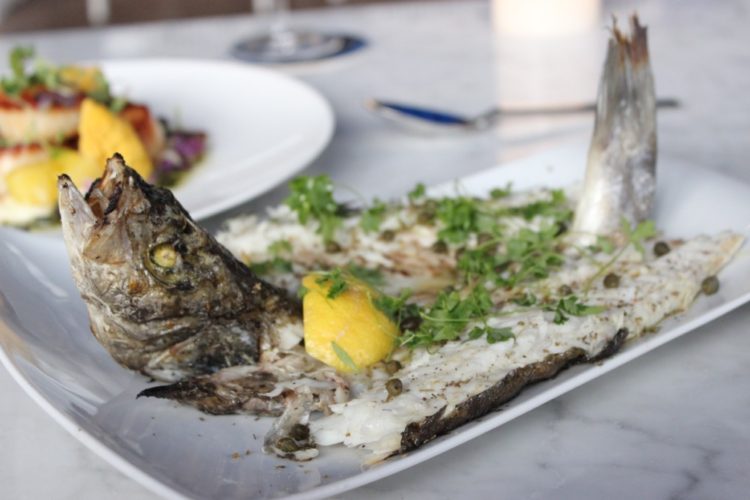 The meal still isn’t over. Aside from offering whole fish, Ouzo Bay’s varied selection of specialty entrees is pretty impressive. We tried the Thalassina Xtenia, pan-seared Hokkaido sea scallops with rainbow cauliflower gremolata, saffron-braised leeks, and an ouzo-cauliflower cream. Not only was this the most gorgeous dish we had all night, it was incredibly tasty too. Again, ouzo was used in the sauce, but the silky-smooth cauliflower was the more prominent flavor of the two and I couldn’t get enough of it. The scallops were cooked to perfection and were a great size as well. I particularly liked the way the leeks were cooked with saffron, a flavor profile I wish I saw more often than just in paella. This was my favorite dish of the night, not for its flavor (even though it was fantastic), but because of the attention to detail in its presentation. Each ingredient was placed precisely and with purpose. It shows the dedication and hard work going on in that kitchen.  When a plate is full of pretty colors and looks like a piece of artwork, you just can’t help but smile. 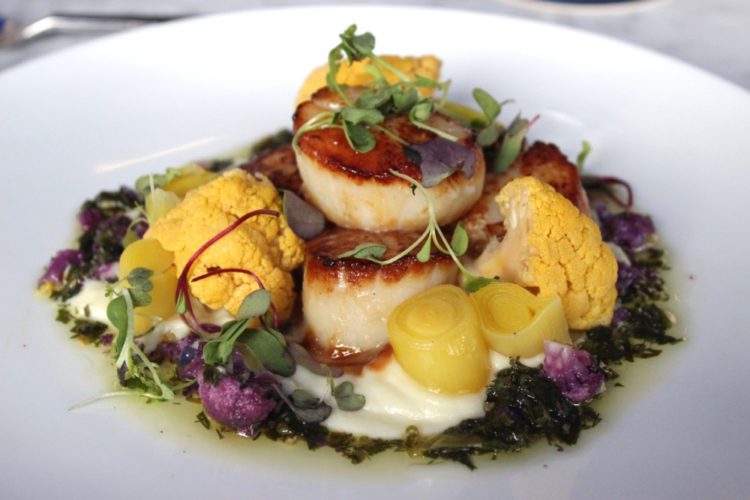 Greek restaurants are known for two very special desserts, Baklava and Galaktoboureko. So naturally, we had to try both. Baklava is the more familiar of the two, with its nut-filled phyllo dough covered in cinnamon and honey. At Ouzo Bay, they used almonds and pine nuts rather than the traditional walnuts and serve it with vanilla ice cream. I’m not a huge fan of walnuts and normally pass on Baklava because of it, so I was pleasantly surprised to hear the swap. For me, it made a huge difference and I found myself going back for bite after bite. The cinnamon-flavored honey syrup oozes throughout the layers and over top, making for a very sticky-sweet dessert.

The Galaktoboureko is just a totally unpronounceable Greek work for vanilla custard. The custard has a phyllo crust and is topped with Orino honey syrup. I still have no idea how to pronounce the name of the dish, and probably never will. I stopped trying. I’d rather just pick up my spoon and scoop up some thick, creamy, delicious custard instead. 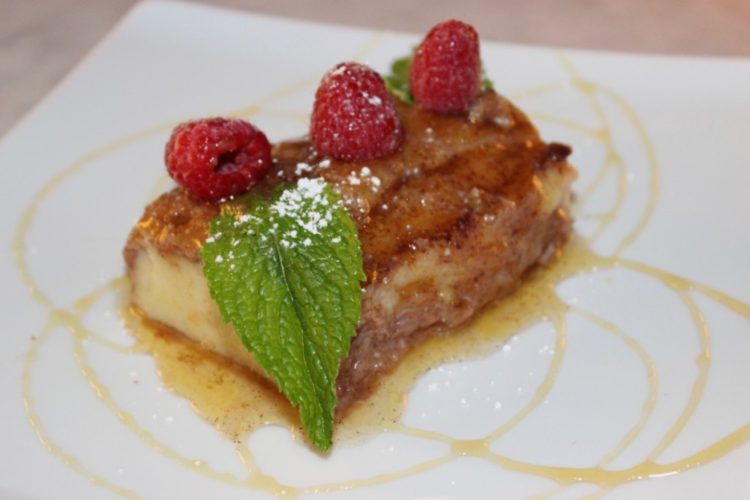 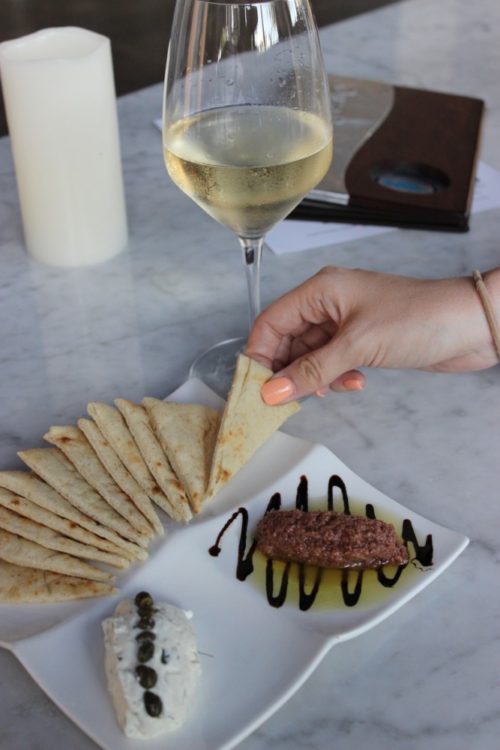 Ouzo Bay is located in Mizner Park at 201 Plaza Real in Boca Raton.