I hope we didn’t pepper you out on Thursday with all of our #PepperParty recipes, because we’re back with some more! It’s a good thing though, because we’re giving away another prize too! If you missed the #PepperParty kickoff on Thursday, here’s a link to my Grilled Peach and Pepper Salad with Honey Balsamic Vinaigrette post with all of our recipes and the rafflecoptor widget where you can enter to win the Le Creuset braiser.

Today’s prize is something every cook needs: a good knife! We’re giving away a Wusthof Classic 8” Chef’s Knife valued at $190. I could totally use one of those! This is an amazing prize so make sure you scroll down to the bottom of the post and enter to win!

Don’t forget to give some love to our awesome sponsor, Divemex, and check them out on Facebook! Here’s a fun fact about this great company. The growers of Divemex specialize in greenhouse grown peppers in state of the art facilities that facilitate the production of the highest quality peppers in some of the safest facilities anywhere.  But most importantly, as a Fair Trade Certified company, they have an unwavering commitment to social responsibility that puts workers first. Pretty impressive, huh?

For today’s recipe, I made something for the very first time ever. Frittata! I know; it’s something so simple and I bet every other food blogger out there has made them a zillion times. But for some reason, I’ve always been intimidated. I am awful at making omelets, so I didn’t think I’d be good at this. But it really is nothing like an omelet so I have no idea what I was afraid of. I don’t like the taste of eggs — never have and never will. So whenever I order any kind of egg dish, it’s always egg whites. It’s healthier anyway! My frittata uses egg whites, spinach, baby bella mushrooms, grape tomatoes…and of course our star ingredients, PEPPERS! Oh, and I topped it with only the most delicious cheese in the world: goat cheese! 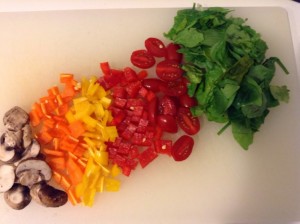 Seriously, if there’s goat cheese in a dish, I’m there. I made the frittata in a very small skillet so it would be just the perfect amount for one or two servings, depending on how hungry you are. You can adjust the measurements accordingly. For my first attempt at a frittata, I’m pretty impressed with how it turned out. Go me! 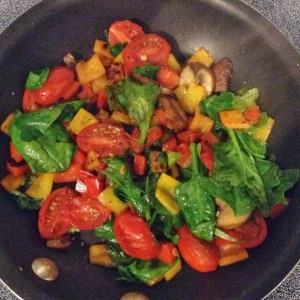 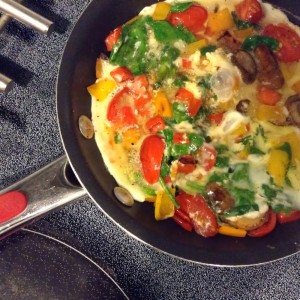 But before I share my recipe with you, check out all of the other bloggers who are partying with me today at the #PepperParty!

Stuffed Bell Peppers with Chicken and Cheddar by Cook the Story

Onions and Peppers Naan Pizzas by poet in the pantry

Steak Fajitas with Drunken Peppers by Cravings of a Lunatic

Spinach, Pepper, Mushroom and Tomato Frittata by Take A Bite Out of Boca

Blue Cheese Pepper Poppers by {i love} my disorganized life

Goat Cheese with Bell Pepper Spread by The Redhead Baker

Now onto my Spinach, Peppers, Mushroom and Tomato Frittata! 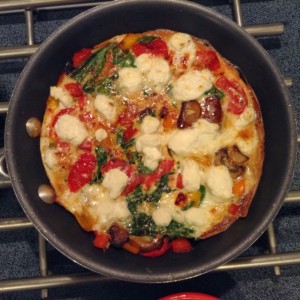 Whisk the egg whites with salt, pepper and garlic powder. Pour over the vegetables in the skillet and stir until combined. Reduce to medium-low heat. Let cook for about 5 minutes, until the eggs set. Do not stir during this time.

Crumble and scatter the goat cheese on top. Broil in the oven for 2-3 minutes or until the cheese is melted. 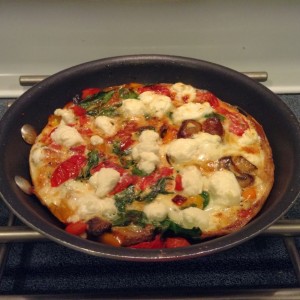